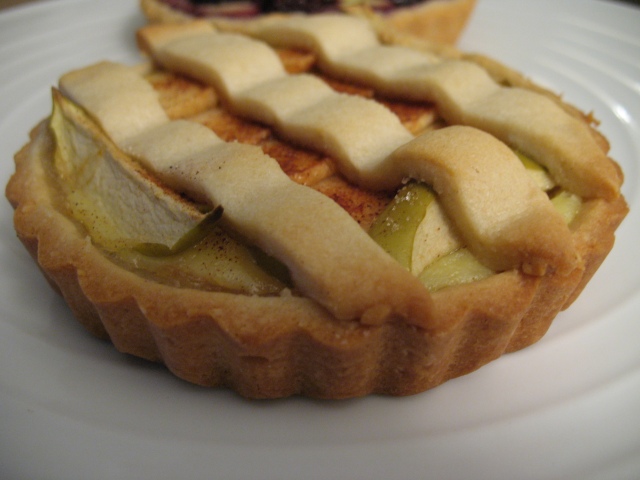 A couple of days ago, I posted my first experience baking rustic tarts at home.  I had quite a bit of pastry cream left over after making the rustic tarts, so I decided to go ahead and experiment with making baked fruit tarts.  Honestly, I just wanted to try my new tart pans!

I made the dough using the same sucre recipe and same mixing process and again let the dough rest for 4 hours before rolling out with my rolling pin.  After rolling the dough into 3mm thickness, I cut the dough into 6 inches circles using a circular cutter.  I stacked these circles between sheets of plastic wrap and put in the refrigerator to rest.   This dough is much easier to work with when it is cool.  After a couple of hours, I removed the dough from the refrigerator and shaped the dough in my tart pans.

After shaping, I placed the tart pans in the refrigerator for several hours before baking. When making tarts, it is important to let the dough rest before baking in order to prevent the dough from shrinking during the bake.

Before baking, I removed my tarts from the refrigerator and docked the dough with a fork.  I pre-baked the tarts for 15 minutes before adding the cream.  For this recipe, I used equal parts pastry cream and almond cream.  I filled the tarts half full with cream. I added sliced apples to half of the tarts and topped with cinnamon and sugar.  For the other tarts, I added frozen blackberries and topped with sugar.  I returned the tarts to the oven and baked for another 25-30 minutes. 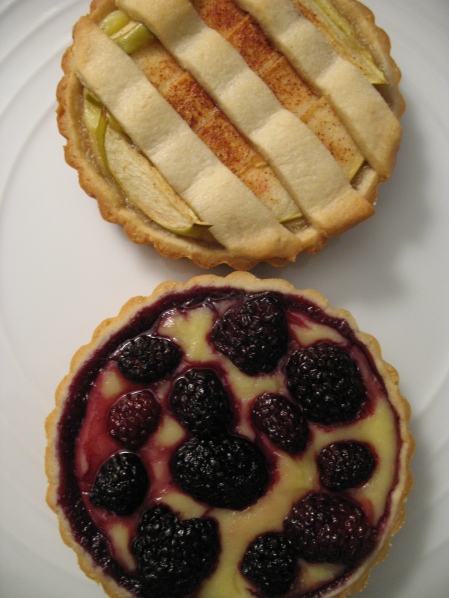 This entry was posted in Pies/ Tarts, The Oven and tagged fruit tarts. Bookmark the permalink.